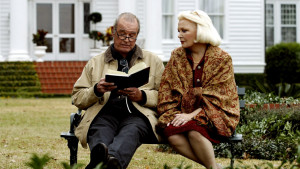 When it comes to Alzheimer’s disease, many people only know what they’ve seen in movies or on TV. Some scenes do a fantastic job of portraying the challenges and realities of dementia, while others miss the mark and perpetuate common stereotypes. We got our Dementia Experts to grade some of Hollywood’s most famous depictions of the disease.

The Notebook is a popular Nicholas Sparks film, which follows the love story of Allie and Noah. Their life is shown through a series of flashbacks, as Noah tells their story to Allie in the present-day at a residential care facility. Allie has Alzheimer’s disease. Noah believes that reading to her helps her remember. The doctor tells him it is pointless, but one night after finishing their love story, Allie remembers everything perfectly and seems like her old self again. But the moment is fleeting, and Noah suddenly becomes a complete stranger to her again as she panics for help from the medical team.

In this scene, there is an abruptness to Allie’s memory loss as if there was a switch turning her memory on and off. Although someone with the disease may have drastic changes in terms of mood and behavior, dementia is a slow, progressive disease.

“The reality is – a person may have moments of clarity and then moments of confusion, but they are not typically as abrupt as what is shown in the movie,” explains Sarina Barker, MSW. “At Alzheimer’s San Diego, we encourage reminiscence in old memories as a way to engage a person living with dementia, however, the person may not remember and become who they once were.”

Our grade: D
While we think the intentions were good with this movie, it’s unfortunately created and perpetuated many stereotypes about Alzheimer’s disease.

In Finding Nemo, Dory displays symptoms of short-term memory loss that can come with normal aging, where you tend to repeat yourself and lose your train of thought.

In contrast, Mama Coco shows symptoms of long-term memory loss that occur with an Alzheimer’s diagnosis where people who should be familiar to us such as family members become strangers. Coco overall does a great job of showing how the power of music can spark memories for people with dementia in which they are even able to remember song lyrics.

While neither of these movies digs very deeply into the causes of the memory changes, they both treat the characters with dignity and showcase these changes in a sensitive way appropriate for younger audiences.

Our grade: B
Both of these movies did a wonderful job of showing how memory loss can affect everyday life, while still respecting the characters living with it.

The film adaptation Still Alice, based on Lisa Genova’s novel by the same name, paints a powerful picture of life with young-onset Alzheimer’s. It shows how it impacts the person living with the disease as well as her spouse, children and those around her. It also is a raw look into the ways Alice tries to manage the symptoms of the disease, and the strategies she uses to compensate to keep working as long as possible. It is an emotional roller coaster and one of the best representations of dementia we’ve seen.

Our Dementia Experts took exception to one point in the movie, where it made it seem that having the Alzheimer’s gene means you will undoubtedly get the disease. This is not the case. It is very rare for genetics to more than slightly elevate your risk for developing dementia.

Alzheimer’s San Diego held a premiere of the movie when it was released. The theater – full of our families and people who really understand the disease – we’re all in tears as the story was told so well. With its Oscar win and mainstream release, Still Alice is overall a moving and accurate representation of dementia.

Our grade: A-
We had to throw the minus in because of the incorrect information about Alzheimer’s and genetics. However, this movie gets almost everything else right.

Are you living with dementia, or caring for someone who is? Get free support by calling Alzheimer’s San Diego at 858.492.4400.