Dementia is the loss of cognitive functioning—thinking, remembering, and reasoning—and behavioral abilities to such an extent that it interferes with a person’s daily life and activities. Dementia ranges in severity from the mildest stage, when it is just beginning to affect a person’s functioning, to the most severe stage, when the person must depend completely on others for basic activities of daily living.

Many conditions and diseases cause dementia. The most common cause of dementia in older people is Alzheimer’s disease. Other causes include different kinds of brain changes that lead to vascular dementia, Lewy body dementia, and frontotemporal disorders. 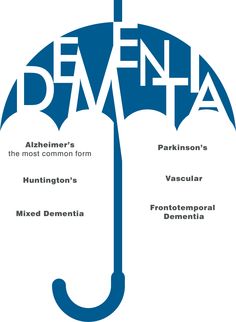 Other causes of dementia include Huntington’s disease, Creutzfeldt-Jakob disease, head injury, and HIV. In addition, some conditions that cause dementia, such as normal pressure hydrocephalus, thyroid problems, and vitamin B deficiency, can be reversed with appropriate treatment. For an overview of all types of dementia, see the booklet The Dementias: Hope Through Research. For more information about these conditions, visit the National Institute of Neurological Disorders and Stroke.

Some types of vascular dementia include:

The overlap between these two types of dementia may be important because medications and lifestyle changes known to help prevent vascular disease, such as controlling high blood pressure, lowering cholesterol, and engaging in physical activity, may also help prevent Alzheimer’s disease.

Lewy body dementia (LBD) is another common brain disorder in older people. LBD is caused by abnormal deposits of a protein called alpha-synuclein in the brain. These deposits, called Lewy bodies, can lead to problems with thinking, movement, behavior, and mood. For example, symptoms may include changes in alertness and attention, hallucinations, tremor, muscle stiffness, sleep problems, and memory loss.

The two types of LBD are:

Lewy body dementia can be hard to diagnose because Parkinson’s disease and Alzheimer’s disease cause similar symptoms. Scientists think that LBD might be related to these diseases, or that they sometimes happen together.

Frontotemporal disorders are a form of dementia caused by a family of brain diseases known as frontotemporal lobar degeneration (FTLD). These disorders are the result of damage to neurons (nerve cells) in parts of the brain called the frontal and temporal lobes. As neurons die in the frontal and temporal regions, these lobes atrophy, or shrink. Gradually, this damage causes difficulties in thinking and behaviors controlled by these parts of the brain. Many possible symptoms can result. They include strange behaviors, emotional problems, trouble communicating, or difficulty with walking and other basic movements.

Autopsy studies looking at the brains of people who had dementia suggest that a majority of those age 80 and older probably had “mixed dementia,” caused by processes related to both Alzheimer’s disease and vascular disease. In fact, some studies indicate that mixed vascular-degenerative dementia is the most common cause of dementia in the elderly. In a person with mixed dementia, it may not be clear exactly how many of a person’s symptoms are due to Alzheimer’s or another type of dementia. In one study, about 40 percent of people who were thought to have Alzheimer’s were found after autopsy to also have some form of cerebrovascular disease. Several studies have found that many of the major risk factors for vascular disease also may be risk factors for Alzheimer’s disease.

Researchers are still working to understand how underlying disease processes in mixed dementia influence each other. It is not clear, for example, if symptoms are likely to be worse when a person has brain changes reflecting multiple types of dementia. Nor do we know if a person with multiple dementias can benefit from treating one type, for example, when a person with Alzheimer’s disease controls high blood pressure and other vascular disease risk factors.

Other conditions that cause dementia