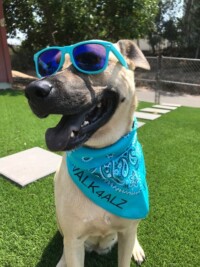 Meet Caico, this year’s official Walk4ALZ Pet Mascot! Caico (pronounced KAY-CO) is a sweet rescue Shepherd mix. She loves accessorizing in Alzheimer’s San Diego blue to show her Walk spirit. She’ll be leading the pack at the start line of the Walk4ALZ at Balboa Park on October 16th.

Haven’t signed up for the Walk4ALZ yet? Join us at Balboa Park, or walk from home >>

Caico is part of Team Lorna’s Loved Ones, led by longtime walker Diane Plein. Keep reading to find out about Caico’s favorite things, and what her team is looking forward to most at the Walk.

Q: Is there a story behind Caico’s name?
Diane: Our son studied abroad at a field research facility in college on South Caico Island in the Turks and Caicos. Occasionally, he would send me photos of different dogs on the island. We both missed our beautiful white Lab that had passed away a couple of years before, and he knew I would enjoy seeing the dogs on the island. They were all very similar in appearance – mid-sized, mixed breed mutts with short hair and floppy ears. I teased about him bringing one home for me, but knew that we had enough rescue pups here that needed a good home. So when he returned from his studies, we went together to a local rescue and picked out Mirage, a 1½ year old Shepherd mix that had recently had puppies. She looked so much like the photos he had sent from South Caico. She hadn’t had the name Mirage for long, and she didn’t respond to it all. It was the perfect opportunity for us to rename her in honor of his time studying abroad – Caico!

Q: What are Caico’s favorite foods/treats?
Diane: Caico will eat just about anything, but she is particularly fond of Buddig sliced turkey deli meat! Being a rescue dog, she had some bad habits when we brought her home – jumping fences, digging, chasing the cat, to name a few – but we found that she would do just about anything for a slice of turkey. She has since really shaped up her behavior, but she still loves turkey as a treat.

Q: What are Caico’s favorite toys?
Diane: Anything with a squeaker! We’ve found that “indestructible” dog toys are not really indestructible at all. No toy is safe in our house if there’s a squeaker inside. She will chew, tear, and throw fluff everywhere until she gets the squeaker out.

Join the Walk4ALZ and change lives >>

Q: Where is Caico’s favorite place to walk in San Diego?
Diane: We live in San Diego’s East County, and she loves any trail with bunnies, lizards, and squirrels to chase.

Q: What are you excited about for this year’s Walk4ALZ?
Diane: We are very excited to be walking in person again this year. While it was nice to walk in our neighborhood last year, it will be great to be in Balboa Park surrounded by so many others raising awareness for Alzheimer’s San Diego.

Q: What is your personal connection to the cause?
Diane: My mom passed away from Alzheimer’s in 2004. Back then, my family didn’t know much about the disease or the programs that were offered to help mom and her caregivers. Though my dad had a full-time caregiver at home for her, I watched him suffer right along with her as the disease progressed. He was so distraught, but he was never really able to reach out and get help for himself.

After she passed, he became part of a men’s caregiver group, which is still a support group that Alzheimer’s San Diego offers to this day. It was only then that I realized how many programs were out there. They not only help those with the disease, but also educate family members and teach them how to deal with difficult everyday situations. I am so grateful I was connected to Alzheimer’s San Diego. Their support and expertise brings relief to so many people living with Alzheimer’s and their families, and makes the journey easier and more manageable.

Lorna’s Loved Ones has walked to bring awareness to Alzheimer’s since 2005. Our team gets larger every year as we walk in support of and in memory of more and more family members and friends. It seems that just about everyone I meet knows someone who is affected by some form of dementia. So let’s all follow Caico as she leads the 2021 Walk4ALZ to raise awareness, to fund new programs, and to find a cure!

Join us on October 16th at the Walk4ALZ! Click here to register for free >>