Robin Parker is as fiery as her bright red hair.

As the Director of the San Diego Harley Owners Group (HOGs), she says their mission is simple: “We ride and have fun. That’s what we’re all about!” 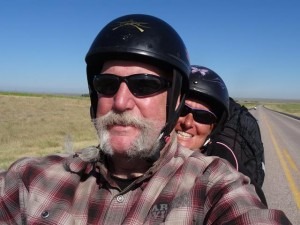 Robin has been riding motorcycles since she was young. Despite growing up in a family that did not approve of riding, Robin began dirt biking in the desert, and soon became hooked on Harleys. She joined her San Diego HOG Chapter #0308 in 2009. Once there, she met new friends and fellow Harley enthusiasts.  Eventually she and her husband Bear, decided they wanted to give back to their chapter and began taking on several officer positions. Today, Robin holds the position of director and her husband is the group’s head road captain. Together they have helped their club flourish and have been an integral part of making Rides4ALZ a success.

Robin is proud to be one of the original co-founders of Rides4ALZ, a 100-mile motorcycle ride benefiting Alzheimer’s San Diego. She became involved with the nonprofit after learning that her mother had been diagnosed with Alzheimer’s.

“I started researching the disease and, like a lot of other people, didn’t know a whole lot,” she said. “My mom and I had an amazing relationship and, as this disease began to take hold, I found we couldn’t communicate anymore.”

She knew she needed help, and signed up for some free caregiver classes with Alzheimer’s San Diego. She says they made a world of difference, and she especially appreciated a class focusing on communication skills.

“It helped me understand what my mom was going through, and the ways I could still reach her and communicate,” she explains. “It got our relationship – our new relationship – in a good place.”

Since then, Robin has been a champion for Alzheimer’s San Diego. She’s participated in the Walk4ALZ fundraiser…and was thrilled to help launch Rides4ALZ in 2017. With Robin’s help, more than 150 riders came together and raised over $75,000 in the event’s very first year.

This year, the goal is even higher: $100,000. You can help change the lives of the 84,000 people living with dementia in San Diego County by signing up to ride or making a donation. Learn more by clicking here or going to alzsd.org/rides4alz.