Robin Harris: The woman behind the camera 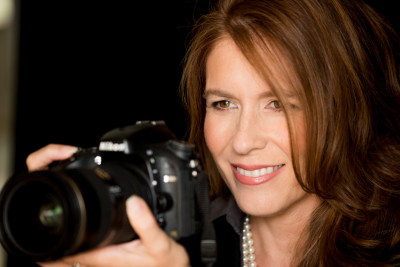 Meet Robin Harris – the talented photographer behind the beautiful images you see on our website and our office walls.

As a professional photographer, she has built her career documenting the special moments in people’s lives. Robin knew a creative path would be her calling, having spent her childhood immersed in art, drawing and painting. After graduating college with a degree in graphic design, she began her artistic journey. It was during these early years of her career that she met her future husband.

“He was a photographer, and he asked me if I’d like to go with him to a wedding just for fun,” Robin explains.

She brought along a camera and soon found herself focused on the unique moments at the wedding – a couple holding hands, or the distinctive way the sunlight would hit the bride’s veil – instead of the traditional posed photographs. Robin uses the term “painterly” to describe how she saw those moments at that wedding. It was then she discovered photography as her vocation.

Robin is generously donating a limited number of FREE family photoshoots to Alzheimer’s San Diego clients in November! Give us a call to learn more and book your spot: 858.492.4400

These days, she has a new perspective about life – and her life’s work. This transformation came about, remarkably, after a telephone call she made to Alzheimer’s San Diego just a few years ago.

Her father died from Alzheimer’s disease in 2008. Prior to her dad’s diagnosis in 2003, she had never experienced Alzheimer’s, and didn’t know much about it. During her father’s disease progression, Robin watched her mom take loving care of him. 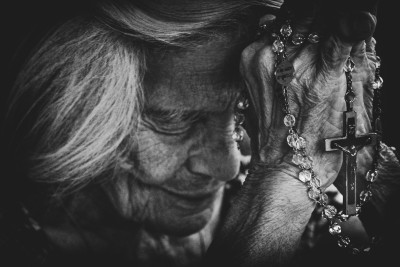 Robin took this special photo of her mother.

As the years went by, Robin was periodically struck with the notion that she should do something.

“It was something in me. I’m not really sure what it was,” she shares. While some might think it was chance or a coincidence, that call to Alzheimer’s San Diego was just what she needed to begin her healing.

She spoke with Jessica Empeño, Vice President of Program Operations, and in that support call, Jessica mentioned an upcoming photography opportunity. It didn’t take long for Robin to sign on.

The results of Robin’s volunteer photography project were framed and have since graced the main hallway in the Alzheimer’s San Diego office for several years. These photos represent a beautiful moment in time for many of the subject couples whose partner was living with Alzheimer’s or dementia. For Robin, they also are the catalyst for her own personal grief healing.

“I started to see that my pictures were helping others with Alzheimer’s or dementia. And through that, I was able to feel good about what I was doing,” she explains. “It turned out to be the best medicine.”

Robin shared an unforgettable moment from her photography collaboration with Alzheimer’s San Diego.

“The one that sticks out for me was my very first photo session with a couple named Dale and Pam.” After the initial welcoming greetings at their home, Robin asked them, “What do you two enjoy doing together?” Dale and Pam smiled and said, “Oh, we like to read the paper!”

What happened after the couple sat down to read their newspaper turned out to be what Robin calls “pure poetry”. 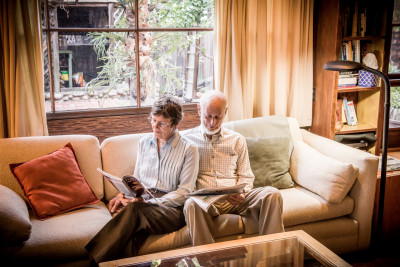 “All of a sudden, Dale just put his hand on Pam’s. I saw a moment start to play out. It’s like I wasn’t even there!” A short time later Dale’s and Pam’s cat joined them on the couch. “It was like a normal early evening moment for them. And I felt privileged to see it…You could just feel their love for each other.”

Looking through the lens, Robin knows she can change the perspective of a picture from close-up or far away. She uses that metaphor now to express how she and others can change their perspective with a family member living with dementia.

“You can change your lens in your own mind. Be present with your person living with this disease, however that works for them”, she says. “Whether that means taking them for a walk, or playing cards, just something that is 100% engagement.”

She’s learned that being present was what was missing for her and her father. As a result of her volunteer photography project with Alzheimer’s San Diego, she discovered how validating and listening to others with this disease can bring about joyful connections.

“If you can do anything to help others with Alzheimer’s or dementia, do it – especially if it’s from your heart,” she says.

Robin also encourages families to document connections, even if it’s with a cell phone.

“It may not mean something right then and there, but to have those photos after your family member has passed is invaluable,” she noted.

“I like how life takes you down a certain path. You have opportunities that come to you all the time. It’s really how you respond to them,” Robin continues.“(Calling Alzheimer’s San Diego) was a complete shift in my life. I’m just full of gratitude…I’ve learned so much, not only as a photographer, but as a person.”