The danger of “staying the course” 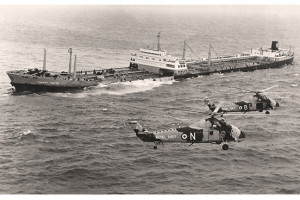 As a social worker at Alzheimer’s San Diego, I have the privilege of helping families impacted by dementia. I am deeply affected by their stories, battles, and triumphs far beyond my working hours.

I was recently listening to a podcast called “Cautionary Tales” and was struck by how the lessons of a historic shipwreck could apply to everyday life – and even dementia care. (You can find the episode by clicking here.) Here’s how it begins.

But on March 18, 1967, the world witnessed a devastating shipwreck.

The Torrey Canyon was making its way past the Scilly Isles off the coast of Great Britain. On the evening of March 17, an officer realized the ship had been pushed off course by strong currents and changed the route. Captain Rugiati woke up early the next morning and changed course again, putting the ship back on its original navigational direction. The route was now going to pass through an area called Seven Stones. As the name implies, the area was full of large rock formations that would spell destruction for passing ships.

Captain Rugiati was sleep deprived and under immense pressure to deliver the oil by March 18. Changing the route again to avoid the formation would have added days to the trip.

Unfortunately, the end of this story is a devastating one. The ship ended up hitting Pollard’s Rock at full speed. The bottom of the massive ship was torn out. Fourteen cargo tanks were ripped open, triggering a devastating oil spill of 13 million gallons. One member of the crew died.

A lot of things had gone wrong. The steering mechanism had mechanical issues and so the Captain had a hard time making maneuvers as the ship got closer to Seven Stones. The Captain was not provided some key notes about the route. The ship was also thrown off by weather conditions affecting the course. But even with these factors, being willing to change the course may have saved the ship.

While not many of us have commanded a ship carrying millions of gallons of oil, there is still something relatable, and universally human, about this story. We all sometimes experience tunnel vision, or an inability to consider any course other than the one we’ve decided on.

It’s not always on purpose, and it’s not just a matter of being stubborn. Psychologists have dubbed this experience as “get-there-itis” or plan continuation bias. It’s studied a lot in airplane pilots – the tendency to continue a certain course of action, even when that’s no longer a good idea.

Rugiati was as baffled and devastated by his unwillingness to change course as anyone else. He wasn’t being willfully careless or incompetent.

When asked why he didn’t change course in time, Rugiati answered, “It was never in my mind,” seemingly stunned by his own blind spot.

I empathize deeply with this. I consider myself an intelligent and reasonable person. But like anyone else, I look back sometimes and wonder what in the world I was thinking.

We all make decisions based on the information we have in front of us at the time. For the most part, we’re rational thinkers. And the best decisions are made when we have abundant information available to inform us. But cognitive biases, like a plan continuation bias, block our brains from receiving and processing information suggesting that changing course might be a good idea.

We make those decisions based on the information we have at a certain point in time. That information may change. Life may throw new conditions at us. Grandchildren, less energy, health issues, changes in the economy or our financial situation. Or a diagnosis of Alzheimer’s disease.

Changing the course can be hard. In the case of the Torrey Pines wreck, it meant delaying the shipment for days, something Captain Rugiati was highly discouraged from doing. Similarly, we might deny ourselves the right to change our plans because we think it implies a failure on our part.

But what if we identified the judgment that clouds our reasoning, and decided to dive into the possibility of changing course? What if we enlisted the help of third parties, like family, friends or social workers, to introduce new information to us? Like the idea that in-home care is a good option? Or moving can cause undue stress and confusion? Or that there’s a memory care community nearby that feels a lot like home, and would be a much safer place to be?

We can confront our biases by stopping every now and then to get a sense of the kind of new information has come up recently. Think about the plans you have set for yourself, and how they hold up to what you’re facing now. And of course, don’t be afraid to reach out. People who care about us can help identify our blind spots.

At Alzheimer’s San Diego, we have a team of social workers (like myself) dedicated to giving you the information and guidance you need to move forward. Don’t be foiled by the need to stay the course. Free support is just one phone call away. That call may be all it takes to open our minds up to the possibilities beyond what we imagined.