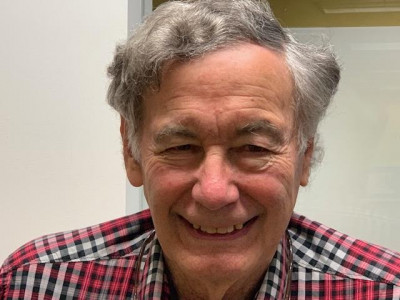 Meet Herb Liberman. He is a passionate Alzheimer’s advocate and a member of the Alzheimer’s San Diego Board of Directors.

This year, Herb is serving as the temporary captain of top Walk4ALZ team, Ann’s Army. With his dedication to the cause, it was only fitting that the team would now be called The LiberManiacs.

“I thought that name sounded good because I am a maniac when it comes to the Alzheimer’s war,” Herb shared with a laugh.

Herb developed his determination to fight Alzheimer’s about 30 years ago, when his mother was diagnosed with the disease.  At that time, his parents lived in Florida, and his father was the primary caregiver for his mom.  After the death of his father, Herb and his wife Beverly became the caregivers for Herb’s mother.

Later, when Herb and his wife made plans to relocate to San Francisco, they were prepared to care for his mom in their home.

“But after we moved, we soon realized she was too far advanced,” he said.  Searching and screening for an appropriate care facility for his mom then became his focus. “We identified an outstanding facility, and my mom remained there for about two years before she finally passed.”

As a result of this personal experience, Herb decided to dedicate his time to support others on the Alzheimer’s journey.

“It’s a great way to not only raise funds, but to honor my mother.  As it turns out, not only my mother had Alzheimer’s, but her sister did, too. That was very sad,” he revealed.

While this is Herb’s first year leading a Walk4ALZ team, he is not short on ideas to raise funds towards his goal.

“The most important thing is to start early to raise money.  The second thing is to go down your email list and find those you think will be good donors and provide them with information about Walk4ALZ,” he says. Additionally, Herb explained the importance of appealing to prospective donors about the need for continued research, support for caregivers, and the various services provided by Alzheimer’s San Diego.  He also encouraged other walk teams to reach out to the Alzheimer’s San Diego development team – Michelle Van Hoff and Noelle Woolway – for ideas and support.

“I’ve been involved in the Alzheimer’s war for many years,” Herb said proudly.  He was active in his community when he lived in Northern California, and is now serving as a board member for Alzheimer’s San Diego. “I chose to join the Board because I felt it was another way to honor my mother. I think that’s really important.  But to also help in whatever way I can to reach out to people who have loved ones with dementia.”

Herb shared some of his personal highlights while serving as a board member, such as meeting people who tell him their loved one has Alzheimer’s.

And Herb has taken that concept of ambassador even another step further by becoming a Support & Discussion Group Leader.  After completing a thorough training class, Herb was assigned to lead a new group in Carmel Valley.

RELATED | Find a Support & Discussion Group near you

There have been some challenges for Herb as a group leader.  He explained how a member in the group may ask about a particular new experimental drug, expecting him to know all about it.

“Needless to say, I don’t,” he replies. “Everything I know about Alzheimer’s first comes from personal experience, second, reading, and third, attending the Alzheimer’s San Diego board meetings.  The more knowledge I have about what’s going on with research, I can impart that to the group.” If Herb doesn’t have the answer, he will direct the person to another source, or he will research the answer himself.

When asked what advice he would share for anyone thinking about becoming a Support Group Leader, Herb immediately said: “I will always encourage them.  But what I would also say is that as a Support Group Leader, you don’t talk that much. You listen!  Give everyone the opportunity to talk, ask questions about a loved one’s situation, keep the meeting moving along.”

Leading a Support & Discussion Group has been rewarding for Herb.

“My life right now is one of giving back,” he says. “I want to feel good after each group session, and by providing members with support and Alzheimer’s San Diego service information, I do feel good that I have done my job.”

“I think it has been very positive,” Herb says with a smile.  “They keep showing up!”