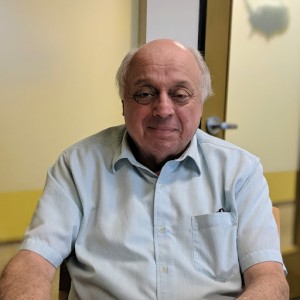 Rob Holmes wants you to learn from his mistakes.

He’s a longtime volunteer with Alzheimer’s San Diego, and is passionate about helping people living with dementia and their families. He knows this disease all too well – his beloved wife, Joyce, has Alzheimer’s.

For Rob, volunteering isn’t just a way to pass time (although that doesn’t hurt, either). It’s a way of ensuring other care partners like himself have the guidance and support they need on this difficult journey.

“I started volunteering for two personal reasons. First, I had a lot of time on my hands when my wife Joyce ended up in memory care,”  Rob explains. “But most of all, I thought sharing my personal experiences might help others not make the same mistakes I made.”

Rob discovered Alzheimer’s San Diego when he was looking to learn more about dementia after Joyce was diagnosed. He attended several education classes, and then started volunteering at the Walk4ALZ.

Eventually, he became an ALZ Companion volunteer… something he describes as a bit of a happy accident.

ALZ Companions commit to spending four hours each week with someone living with dementia so family caregivers can take a much-needed break. Rob signed up for a Companion training class simply to learn more about the program – and to see if it was going to be a success. Having gone through difficult moments caring for his wife, he also thought it would be a good idea to share his experiences with the new trainees.

“Everyone thought I was volunteering because I wanted to do respite care, but that was not the case,” he says with a laugh. “That was a big surprise to them.”

In the end, the biggest surprise was actually on Rob. After learning more about the program, Rob decided to become an ALZ Companion himself.

“I learned how important it is to have patience, and to try and establish a close relationship with the person you’re spending time with,” he says. “That makes it a better experience for you both.”

Five years later, Rob is still actively involved with Alzheimer’s San Diego. His favorite role is serving as a liaison between Alzheimer’s San Diego and the Scripps Ranch 50+ community, to coordinate education opportunities in the area. In fact, he even helped facilitate a recent class with Education Director Amy Abrams called After the Move to Memory Care.

Rob is always happy to direct people he meets to the social workers and resources here at Alzheimer’s San Diego.

“People often come to me expecting I know all the answers,” he says. “I tell them to keep at least one of the phone numbers I give them in their wallets.”

To learn more about becoming a volunteer, contact Adrianna McCollum at amccollum@alzsd.org or 858.966.3296.