Wandering & Alzheimer’s: One program can make a difference 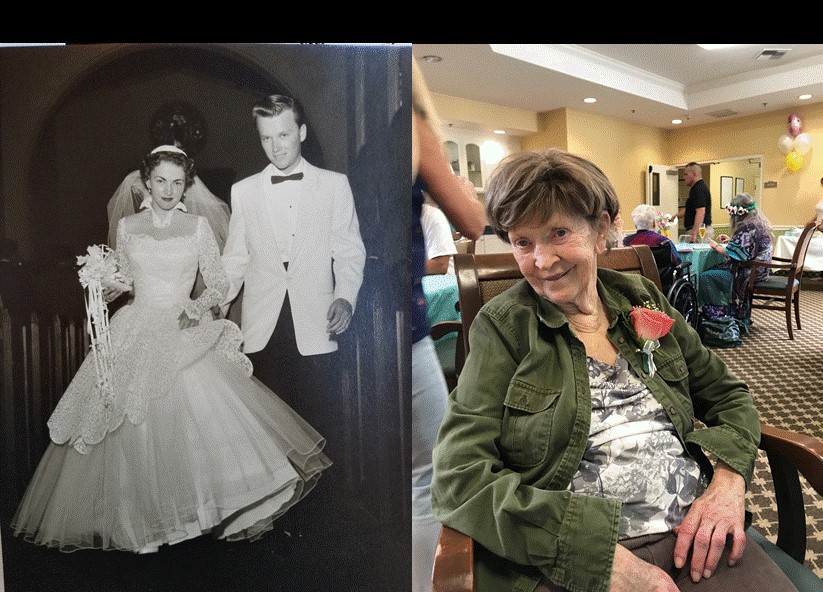 The Beginning (left), and The End.

My wife Patricia was diagnosed with Alzheimer’s in July 2008. This was the beginning of her long Alzheimer’s journey and the beginning of my own journey as her caretaker. In “The Beginning” picture we were married out of high school in 1956, and “The End” picture was taken at the memory care facility (Elmcroft of Point Loma) a few days before she passed away on June 10th, 2018.

As her caregiver, I saw Patricia pass through each stage of the disease and had to deal with all the life changes as she slowly lost her ability to do everyday tasks. As she entered the later stages, I recognized her cognitive ability was also diminishing, so I planned multiple trips for us in our 5th wheel RV to enjoy the days we had left.

Traveling was one of our favorite things to do together. We had taken multiple trips in our RV to Northern California, the Northwest, the South, and the East Coast in the past. When I saw Patricia’s abilities were declining, I planned trips to our favorite places. During the times we weren’t traveling, I hired caregivers to come in two days a week, as she needed close observation to prevent dangerous situations from arising. She still seemed to enjoy the trips though, and so I put together one last adventure.

In February of 2014, we embarked through the South and things seemed to be going well until we were in an RV park in Navarre, FL. On the evening of March 20th, Patricia told me to leave because her husband was coming to get her. I had known this day was coming for a while now, but it was still a shock. I tried to convince her that I was her husband to no avail. She started wandering through the RV Park looking for her husband. I followed her until she got tired and finally got her settled into bed. I truly believe that she knew she had a husband, but could only remember what I looked like many years ago, not what I looked like now. For the rest of the trip home, Patricia kept looking for her husband. This was when I realized I had lost my wife.

Eventually, Patricia also lost her ability to communicate; her sentences began to ramble. I had no idea how difficult this would be. She also began slipping out of the house when the sun went down, a phenomenon I later learned was called sundowning. I would get my kids and grandkids to start searching the streets of Ocean Beach for her. It would take a couple of hours to find her and thank God she never was injured. We did not call the San Diego Police Department (SDPD) for help since we did not know what they would be able to do.

LEARN MORE | What is sundowning?

In late 2014, Patricia started sneaking out of the house whenever I was distracted. If I went to the bathroom or tried to take a shower, she was gone! If I could not find her, I would call 911.They would always tell me to call Alzheimer’s San Diego to get help. Little did they know how many times I had already contacted Alzheimer’s San Diego and attended their classes to learn about the various stages of the disease. But Alzheimer’s San Diego is not 911, and the advice from the police officer was of no help in finding a wanderer.

On the first of the year, 2015, I moved Patricia into the Elmcroft memory care facility. It was very difficult, but she had a safe and much better life there. She lived there until she passed away on June 10th, 2018.

The moral of this story is that I needed a system for minimized time with law enforcement that helped keep my wife Patricia out of dangerous situations when she wandered. I then learned about the San Diego County Sheriff’s Department Take Me Home program from Alzheimer’s San Diego, which allows caregivers to enter their person’s information into the Take Me Home database that any law enforcement agency can access. It is very simple, secure, and free online. All law enforcement needs to do is to scan a person’s face or have their full name so they can help contact appropriate people and instantly identify them.

I began advocating for this program in Ocean Beach (OB) through the OB Town Council and suggest any caregivers register their person. I received information from a very helpful Sergeant at the SDPD Elder Abuse Unit, that said the main problem now isn’t protecting people with Alzheimer’s from wandering, but just getting them registered in this program. Alzheimer’s is the third leading cause of death in San Diego behind heart attack and cancer, I suspect there are many potential wanderers out there and believe if I’d known about this program sooner I could have protected my wife from a lot of close calls.